Ever since my IE got completely hosed by a trojan (Anyone know how to completely uninstall IE? Everything I've tried doesn't work), I've been using Firefox.

It's fine as a browser so far, but every now and then, I come to a page that has the funkiest text display. I've seen it on Lists of Bests and Wordpress. My guess is it has something to do with how Firefox reads CSS since my default fonts are Times New Roman and Arial.

I've got a screenshot so you can see what I see (to quote Johnny Smith from The Dead Zone). Anyone else ever have this problem? If so, how'd you fix it? 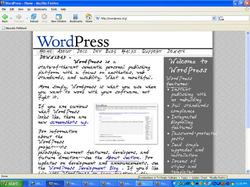 nope- just you. :) I use Firefox, and it renders these pages just fine.

IE doesn't completely uninstall if you're using any version of Windows beyond Win98, I think. Maybe even Win95... IE is integrated into Windows, which is one reason there was/is a lawsuit against MS. Sorry, you're stuck with it.

Wow, that is just BIZARRE. WP has *never* looked anything like that in my browsers.

I think you're just going to have to reformat. That bug you have is just evil.

I've seen a similar problem at one point, but only on Linux :)
What happened is the website trying to use a font that's not installed on the machine, and it was then defaulting to the first one it found (which is some funky looking font that starts with an "A"). Check if the first alphabetlical font is that funky font. (Browsing to c:\winnt\fonts does it in win2k - don't know about winxp). If so, you might consider either trying to :
1) Play with Firefox's preferences - reset all the fonts, and save prefs
2) Make sure you have the font WP is trying to use.
3) Reinstall something ;)