When I went to Vegas with Christine last month, my glasses got bent on the airplane. Being the genius that I am, I decided that I would try and bend them back into shape, only to snap the arm completely off. Ever since, I've been wearing them without the right arm which, actually, I don't really mind. (Whenever I fall asleep on the couch, it just makes it more comfortable since the arm isn't between my face and the couch).

However, since my trip to Philly and New York to see Mac and other assorted bloggers is next week (Whee! I'm so excited!), I figured I should get the glasses replaced so I don't look like a total dork at Mac's house. And, honestly, those glasses have got to be at least seven years old, so who knows how terrible the prescription really is.

So, today I went to the eye doctor (really cool guy - collector of Elvis memorabilia and has a daughter that's a web development projet manager as well, though she actually has a job) to get new glasses and contacts (since I'm on my last pair). I found two frames that I like, but I wanted to get some opinions on them. Since I had my ever-present camera phone on me, I snapped a couple of pictures. Granted, it's easier to see the glasses better in one picture than the other, but what do you think? (Click to embiggen.) 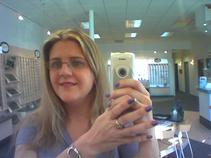 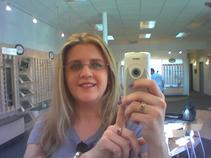 Find many different styles of Glasses online?
You will find a variety of designer glasses in an assortment of glasses frames. If it is value you want, we have cheap spectacles as well as GlassesCrafters.com.

I think the ones on the left look better on you...

I vote for the ones on the left. Flattering shape :)

They're both nice but the ones on the left look better. The shape is nice

I like the ones on the left too. Question..did you ever get your free iPod mini?

I'll go with the ones on the left too. I get to pick up my new glasses today! woop!

The ones on the left are very flattering. Don't you just love getting new glasses?

they both look great Kymberlie! But if forced to chose, I would go with the ones on the left, though the right ones look pretty darn snazzy too! :)

I refuse to bow to the majority. The glasses on the right rule.

Hey, just wanted to let you know that Chase is hiring over 300 people for their IT department.

Nice Photo! The one on the right. You should take your show er um...fishbowl photography, on the road!

I hate to jump on the bandwagon but I too vote for the left. Coincidentally, I ordered new glasses today too (2 pair, I couldn't make up my mind) and they will be a new look for me. Can't wait!! I wish I could get them before Tiara HH but I won't get a chance to pick them up till Saturday. :(

very nice.....the ones on the right really suit you.